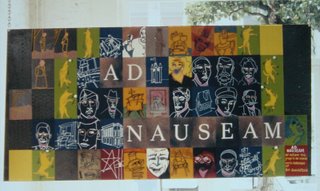 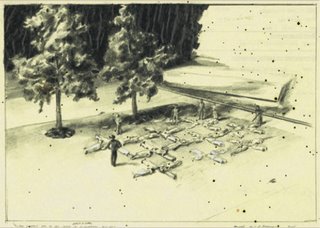 Illustratie: Michaël Borremans - The Good Ingredients, 2006.
Posted by DDV at 2:45 PM No comments: 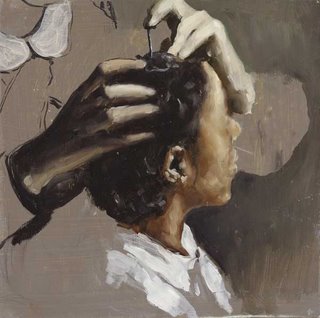 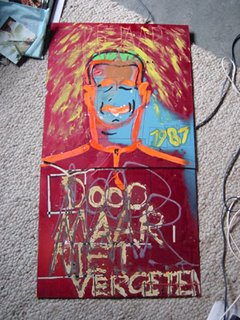 Longing for the Real Picture aka Oil Painting on Canvas in Flanders' Small Apron aka Wollen Sie die Totale Malerei?

1. I've seen that face before
With a very little bit of amusement I have read Pas & Ruyters' essays "The Longing for the Pictorial" and "Painting in Flanders after 1980" for 'Openbaar Kunstbezit in Vlaanderen'. The cover sports "Der Diagnostische Blick" from Luc Tuymans, oil on canvas from 1992.
I've seen that face before, namely in the studio of Headnurse AMVK (Anne-Mie Van Kerckhoven) back in the late eighties. She was doing a series of paintings (huh?) of people diagnosed with heart diseases, based on illustrations in a german book of people whose type of disease could be read from symptoms in their facial expression.
From 1987 till 1990, AMVK also made a series of 54 portraits based on Heinrich Heine's poem "Die Loreley". People came to her studio, by chance or on their own behalf, and posed for 2 hours while she painted their portrait. She always started with the white of the eyes.
Luc Tuymans is portrayed as nr 37, "sie kämmt", and Marc Ruyters as nr 57, "er schaut nur". Finally the 54 portraits were used in a computer-animated movie and an interactive hypertext on the internet.
www.clubmoral.com/amvk/Loreley

2. TroubleCar.Rijksakademie
Since 1993 Narcisse Tordoir, Luc Tuymans and Headnurse AMVK have been so-called 'advisors' at the Rijksakademie in Am*dam. All three living in Antwerp, they split a car about 15 times a year to drive up north while having heated discussions about painting on the way. Those were also the peak years of the NICC, an artist led organisation in Antwerp that changed the barren landscape for artists in Belgium. Anyway, these three painters' vigourous car discussions resulted in Tuymans and Tordoir organising "TroubleSpot.Painting" in the NICC and Antwerp's Museum of Contemporary Art M_HKA.
Headnurse AMVK not only had her work represented in TroubleSpot.Painting, but at the same time had a full flavoured show "Nursing care, in melancholy stupor" at the M_HKA with paintings, drawings, installations, videos and interactive computer works.
www.clubmoral.com/amvk/muhka

3. Forgotten but not dead
In spite of TroubleSpot.Painting that aimed to present painting in its present time with sculptural influences, videos, photos and installations, seven years later Ruyters still narrows it down to 'oils on canvas' :(
Apart from cycling, nothing has ever risen from the mud of Flanders' fields as they were in the trenches of the Great War. With bigmouth Tuymans (78.700 hits on google!) as the head of the dragon to conquer the world with oils on canvas we're supposed to believe we're a great painting nation. Unfortunately the bulk of the platoon follows with a lot less: De Keyser at 18.200, Borremans at 9.580, then steep down to De Beul at 620 and Tordoir at a mere 550.
Cycling bigmouth Eddy Merckx scores 758.000 hits on google, a loooong way to go for Tuymans. Another long dead (Antwerp 1956) cycling hero, Stan Ockers, scores a good 13.500 hits on google. He's dead, but not forgotten. Whereas Anne-Mie Van Kerckhoven with 12.100 hits on google is forgotten in Flanders after 1980, but then she's not dead....

4. Wollen Sie die Totale Malerei?
Let's face it, contemporary art in Flanders is mud on burlap when you read about it. And it will remain so unless some decision makers, media guru's, and true believers get going. Flanders looks like it a lot, but this is not the middle ages anymore. Nowadays there's modes of communication, publication, worldwide distribution, and you can literally hold it in your hand! It's gut wrenching to read all this believers' idiosyncratic rim ram, always leaving the world behind with a compassionate smile instead of wild eyed interest for art in Belgium.
We've got installation artists, video artists, performance artists and media artists in Belgium that make each and every Bill Viola, Paul McCarthy, Matthew Barney or Bruce Nauman gasp for breath.
We don't need a Ministry of Culture, we need a Ministry of Propaganda!

DDV
Stakeholder in an Environment for Contemporary Art
20060113

This article was written on 13 jan 2006 on the occasion of the publication of "Painting in Flanders after 1980", a concise translation of the Winterissue of "Openbaar Kunstbezit in Vlaanderen".