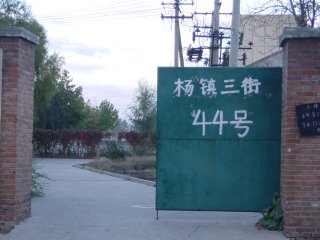 A translation in English of the piece below. Only one day after I posted it there were already over 100 votes. Factor 44 is an independent underground Art Club in Antwerp, Belgium. It is runned by Harry and Heini, and for some or several reasons they were thinking of quitting. If Heini manages to, more explanation about that should be available on their website, eventually in dutch, french and/or english.

It's god-shame that even taking into account the given reasons that such a lively initiative like Factor 44 would consider 'Redefoundation'. Apart from the summer barbeques of 'De Koxvrienden' there is no other place in Borgerhout but not even in all Antwerp with as much cultural-life-necessary events like Factor 44.
Heini Obst's targeting analysis clearly shows that Flanders by word and deed from its authorities hasn't understood a lot of a well breeding Environment for Contemporary Art. The 'overhaul operation' that should bring the visual arts on a comparable professional level in regard to other arts is one and a half year later only ointment on a wooden leg: some organisations have become better, although often it's the people involved or behind the scene whose income has seriously improved. While for instance Extra City fires its artistic director because he can't account for some 90.000 euro, Harry and Heini are rowing in a boat for which the Flemish Government only spends 10.000 euro, a year that is. And while for instance at the NICC a team of 6 Young Lions have taken over, we didn't see any activities while Heini and Harry have hammered together some 6 JourFixes and some off-the-record events (including undersigned's China Report) in their free time.
Factor 44 is the least subsidised of all Visual Art Organisations in Flanders but probably has the largest palmares of organised activities, which doesn't mean we aim for quantity instead of quality, but then nails with head are being hit. Strange though that such a thing doesn't reach people in the capital. Is it because from the members of the government's advisory committee only Johan Pas shows up once in a while to show off his punky hairdo in full glory? Or even more because he was too busy with his monsterstudy about such an other initiative from a slightly older Environment for Contemporary Art to attend the advisory meetings regarding Visual Arts Organisations? Or is it because advisor Hans Martens tells the Minister of Culture part-time that there are already too many big budgetwolves in Antwerp and that some money should go to his hometown of Gent too? Or maybe he has too much at hand in his second part-time job proposing artists from his own institute and again town? It's a Flat Flat Planet....
When there wouldn't be of course, the 500.000 fans of Factor 44! Yep, we're starting a petition today to support Harry and Heini. Next year there should be at least a workable budget to organise at least one activity a month. The should also be a budget to get Heini out of his welfare-situation so he can take charge of daily administration, and Harry's carpenterwork and rides with his own car should be paid by Factor 44. For a large Flemish Community this is only a small gesture, and many small things make something big, so vote now that Factor 44 should stay!

Danny Devos
Factor 44-fan since the Old Days,
Stakeholder in an Environment for Contemporary Art.
Posted by DDV at 5:56 PM